Began by Fredrick Weyerhaeuser in 1900, this multi-national corporation has grown into an industry leader in paper and pulp production, private timber land ownership and now real estate development.  Its long history illustrates a company of vision and business acumen, and also of environmental recklessness.  Its operations span the globe, and it owns tens of millions of acres in the United States alone.

Just off Interstate 5 in Federal Way lies its international corporate headquarters. The 500 acre site was developed in 1971 by Skidmore, Owings & Merill, the same group that built the Sears Tower in Chicago.  Considered a modernist masterpiece, the building was dubbed a “groundscraper,” implying that its majesty was displayed horizontally rather than vertically.

The main building was one of the first large-scale office complexes that sought integration with its environment.  The long planes of concrete seem nestled between the green hills on either side of the building.  Ivy envelops each of the terraces, giving the impression that the building has arisen from the earth below, rather than having been placed upon it. 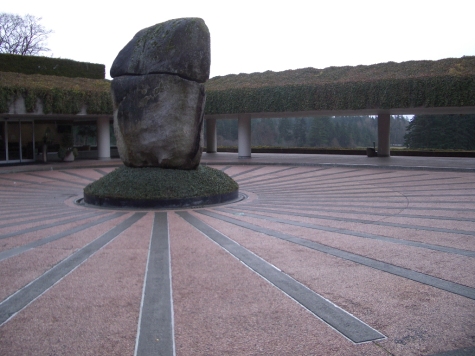 At the west entrance to the offices, an enormous boulder rises from the center of the roundabout.  Weighing in at 70 tons, this sculpture, entitled “Guardian Rock” was created by San Francisco artist Gordon Newell for the original opening of the building.

Miles of trails and pathways weave through the surrounding forest on the property.  The photo above shows a glen commemorating a company officer who died unexpectedly.  The long mossy bench, surrounded by rock work, is almost indistinguishable from the greenery around it.

The Weyerhaeuser property also holds the Pacific Rim Bonsai Collection. Before its closure in early 2009, the exhibit held over 60 masterpieces of this subtle fusion of art and nature.  The company suffered severe losses in 2008 due to the collapse of the housing construction industry, and the Bonsai Collection was one of its many budget cuts.

Adjacent to the shuttered bonsai exhibits is the Rhododendron Species Botanical Garden.  Hundreds of these plants, varying in size and type, are labeled along the wooded trails. Especially beautiful was the Alpine Garden, pictured above, where the color and texture of the plants approximates the scenery of a high altitude hike at Mt. Rainier.  This garden comes highly recommended in June and July, when the flowering plants are in bloom. 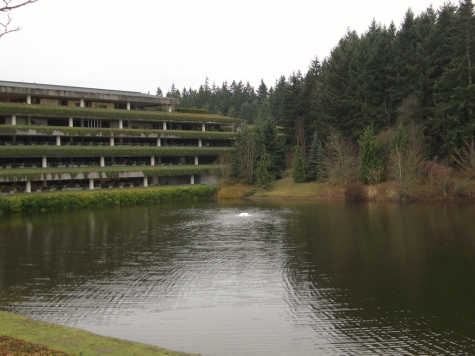 As a giant in the natural resources extraction business, Weyerhaeuser has paid millions in dollars in fines for environmental negligence.  What a powerful irony then, that in their own backyard, the company has created an almost religious tribute to all things natural: a 354,000 square foot building that miraculously rests peacefully within the land, woodland trails that offer solitude, and gardens that celebrate the wondrous variety of the botanical world.

Posted by ryanjhollander on January 17, 2010 in Uncategorized.